A comparison of the dana.wireless by Alphasmart and the 360LX by Hewlett Packard. 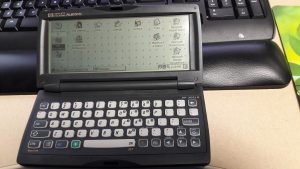 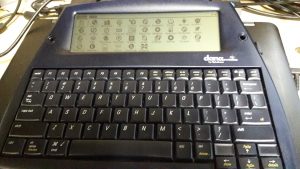 These two systems came out about 4 years apart, so not a completely fair comparison, but let’s try anyway.

So, what is it like to use a handheld PC from 1997/1998? To be honest, the keyboard is pretty awful, but I think it is more a getting used to issue than inherently bad. The Jordana that came later had a much better keyboard. Nothing compares to the dana’s keyboard, which was built for touch typing and was originally designed to TEACH touch typing on. 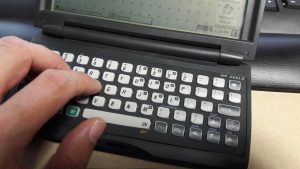 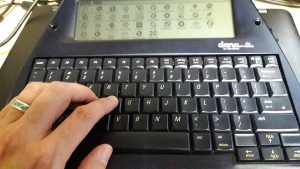 The biggest difference I have noticed is the operating system. Windows CE, for better or worse, tries to act like a desktop windows machine. I looks and acts a lot like Windows 95, down to having to double click on items on the desktop. Surprisingly, the Palm OS is a better independent device. The Windows CE machine was meant as a companion to a traditional PC. I am sure once I get the sync cable, it will be easier to get software and data on and off. (Edit: it does make it easier.)

The biggest drawback I have noticed in Windows CE on the 360XL is the speed, it is slow.

The 360XL has a 60Mhz, 32 bit RISC CPU and 8mb of RAM; the dana has a Dragonball VZ at 33Mhz 32 bit, with 16mb of RAM. The screen redraws can be slow. I suspect the big difference is the external bus width; 16 bit vs 24 bit and the underlying operating system. The Palm OS is just much more responsive opening and closing applications and files. In and application, the 360XL seems a little faster, such as using spellcheck. Opening and closing is much slower on the HP. Saving to RAM should be nearly instant, not have a 3 to 5 second waiting hourglass. On the dana, saving to RAM is more or less instant. Saving to SD takes a little longer, but still much quicker than the HP.

The dana really spoiled me, with the effortless connectivity and much more modern features. My Lifedrive spoiled me even more, with USB sync, Wifi, and even Bluetooth! Both the dana and the Lifedrive use SD card, which are the de facto standard for portable storage. A product of its time, the 360XL has a Compact Flash slot. It also has a PCMCIA slot, which opens up the possibility of expansion with networking/modem, etc.

That being said, the 360XL is a still a fun device to play with, and unlike the iPAQ I wanted to experiment with, the old HP actually works. The screen is petty usable, 16 level greyscale. It also used standard AA batteries, so I don’t have to hunt down anything exotic. I do see what Microsoft/HP was going for, in terms of interface and hardware. If you grew up on or recently learned windows 95 (two short years before) everything will be very familiar. Even the keyboard shortcuts work. The included file explorer works great and the included office suite is quite competent, especially Pocket Word. Word operates much like Word 97, with spell checking, copy, paste and various fonts. More than enough in a pinch, in fact, the first draft for this review was written on the

360XL. I had to revert back to my dana for finishing off the document, the small keyboard wears thin after a while.

Now that I have a proper docking station, the 360Xl is a lot easier to work with. It is a creature of its time, using a serial connection, USB is still a year or two out from here. The 115,200 bits per second transfer rate sounds awful, but not as horrible in practice. Setup is pretty straightforward, just install Activesync 3.8 and a few basic setup questions and it just works. I was able to install service pack 1 and I installed the network stack. The docking station allows for charging the NiMH batteries. I am interested to see how well low drain, high capacity cells work. One of the original complaints for this handheld are poor battery life, but with 20 years of battery advancements, I have no complaints. The dana also charges batteries in the unit, via USB. Both appear to have excellent battery life now. On the 360XL, the screen is much easier to see with the backlight on. 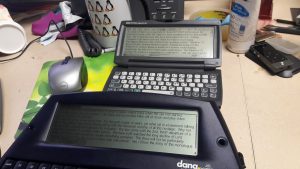 Speaking of the screen, I am a little conflicted. In theory, it should be very easy to read, with its half VGA 640×240 resolution and almost white backlight. However, despite the very sharp text, complete with anti-aliasing, the contrast is poor, dark characters bleed all the way down the screen. There is also a noticeable gap between the touchscreen plastic and the LCD layer. In addition, the LCD layer floats above the bottom glass substrate and you end up with noticeable shadows on the back reflective layer.  I have a Palm III from the same year as the 360XL and it has a much lower resolution, at 160×160, but the contrast is far greater, with no LCD bleed or drop shadows. See here: 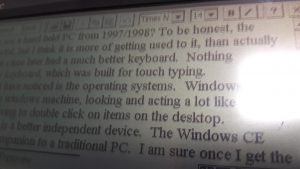 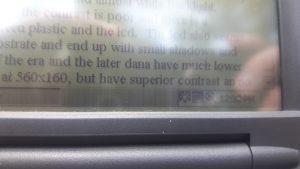 The display has an odd graininess to it, which I have not seen on any Palm device. A side by side comparison makes it more obvious. 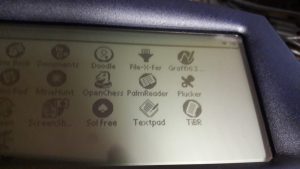 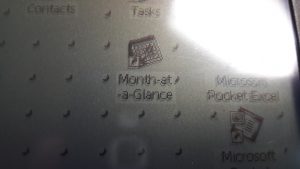 To wrap this is, I am happy with my silly purchase. I think my greatest frustration is the utter lack of software for Windows CE. You better like what came with the device, there is not a lot out there for CE 2.0. I can find more software for my ancient Palm III, which is stuck with Palm 3.0. My Plam VII, which runs 3.5 and my dana runs Palm 4.1 and I can find hundreds of applications. My Lifedrive runs palm 5.0, so it can run close to 2 decades worth of software. CE 2.0 has been long abandoned with few back ports.

This entry was posted in Palm, Windows CE. Bookmark the permalink.

This site uses Akismet to reduce spam. Learn how your comment data is processed.